- The Founder of the Modern Romanian School of Physical Chemistry -

The Institute of Physical Chemistry: 50 years of initial and resumed synchronization.

The Institute of Physical Chemistry was founded in 1963, October 1st by Academician Ilie Murgulescu. Outstanding personality of the Romanian scientific community and political scene, Professor Murgulescu created the modern school of physical chemistry at the University of Bucharest. He devised the main research directions in physical chemistry and set up the structural framework of the Institute of Physical Chemistry, started with Dr. Stefania Zuca (molten salts) and Dr. Dumitru Marchidan (chemical thermodynamics) and further developed under his direction (1963 - 1977). He also initiated and organized in 1968 the First Conference of Physical Chemistry and continued his leadership of this event up to its 5th edition in 1976. He always used his political position to promote genuine professional and moral values and to fight against forgery and imposture.

A man with a broad international recognition and connections, he was dedicated to (and able to sustain) a steady effort of synchronization of national teaching and research activities in physical chemistry with the most important and novel directions worldwide. This was not a simple action in those times: it needed a strong domestic political position and influence. For a consistent period of time (1963 - 1971), all of the PhDs he supervised at the Institute of Physical Chemistry and Faculty of Chemistry were sent abroad, after their defense, to the most advanced laboratories in their specialty fields. 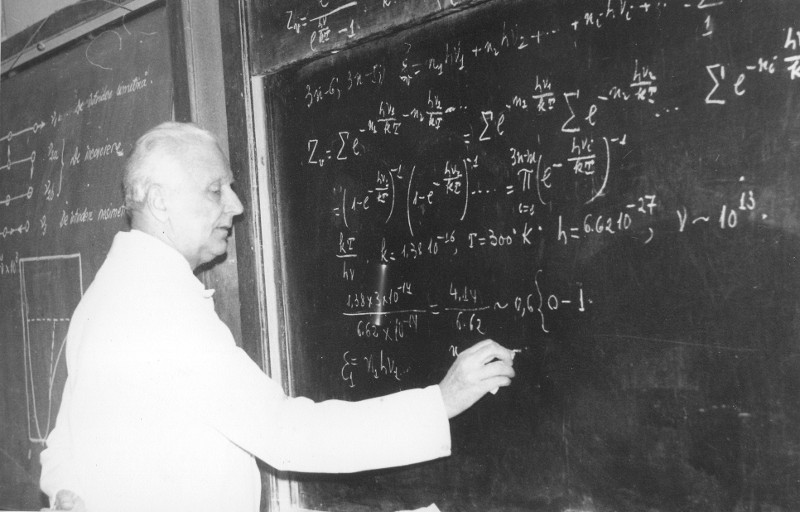 Professor Murgulescu at the blackboard in 1971: from the expression of the Zustandssumme and some other details, one may guess that he was teaching the transition state theory.

We may illustrate this synchronization effort with one example, out of many others: In 1971 Professor Murgulescu was teaching his last (1971-1972) chemical kinetics course before retirement from the Faculty of Chemistry. In the same year our late colleague Dr. Mihai Vass was a postdoc at the University of Chicago ? James Franck Institute, working with Professor Robert Gomer, the initiator of the brand new technique of field emission microscopy.

Back home, Dr. Vass built the first field emission microscope in Romania, at the Institute of Physical Chemistry. The first paper making use of this technique was published in 1975, co-authored by the first PhD of our institute supervised by Prof. Eugen Segal: Dr. Cristian Contescu, one of the plenary speakers of this conference. 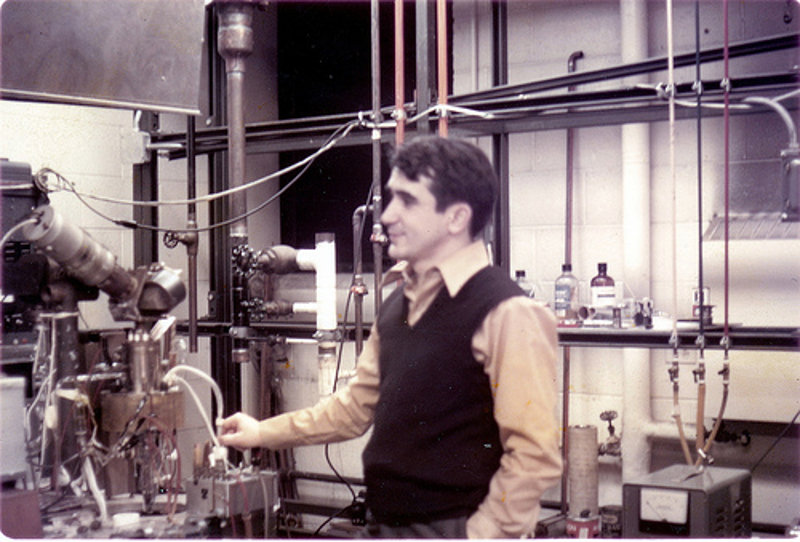 After the Professor?s retirement, the same political reasons forced the Faculty of Chemistry and the Institute of Physical Chemistry into sinuous administrative trajectories, eventually resulting in the loss of its dedicated building and legal personality for the later. In spite of these shortcomings, the research staff was able to survive and develop professionally and get ready for the major changes of the year 1990.
With opened borders, the synchronizing process restarted with high intensity at the individual level. Many of our best gifted colleagues left for advanced laboratories and universities all over the world. Many of them came back and founded new research directions at the institute. Some of them, established abroad, maintained strong and sustained professional relationships with the institute. And some of them are here now at the anniversary, 15th conference.

The Institute of Physical Chemistry made consistent ?holistic? efforts, although being more than the sum of its individuals? achievements proved to be not a simple task. Nevertheless, regular adjustment of the research thematic and personnel structure and strong promotion criteria were taken as synchronizing actions at the institutional level. The research infrastructure was constantly improved in the last 10 years due to consistent funding obtained from national and international projects and EU structural funds. With its 107 PhDs in chemistry and physics, 32 of them with Hi > 8; with > 450 (and counting) ISI papers and > 6000 (and counting) ISI citations within the period 2010 ? 2013; with its 28 (and counting) PhD students the Institute of Physical Chemistry is counting indeed in Romanian and international research community.

We have 56 guests and no members online